Our chocolates are officially delicious - we have now won 100 fine food awards! 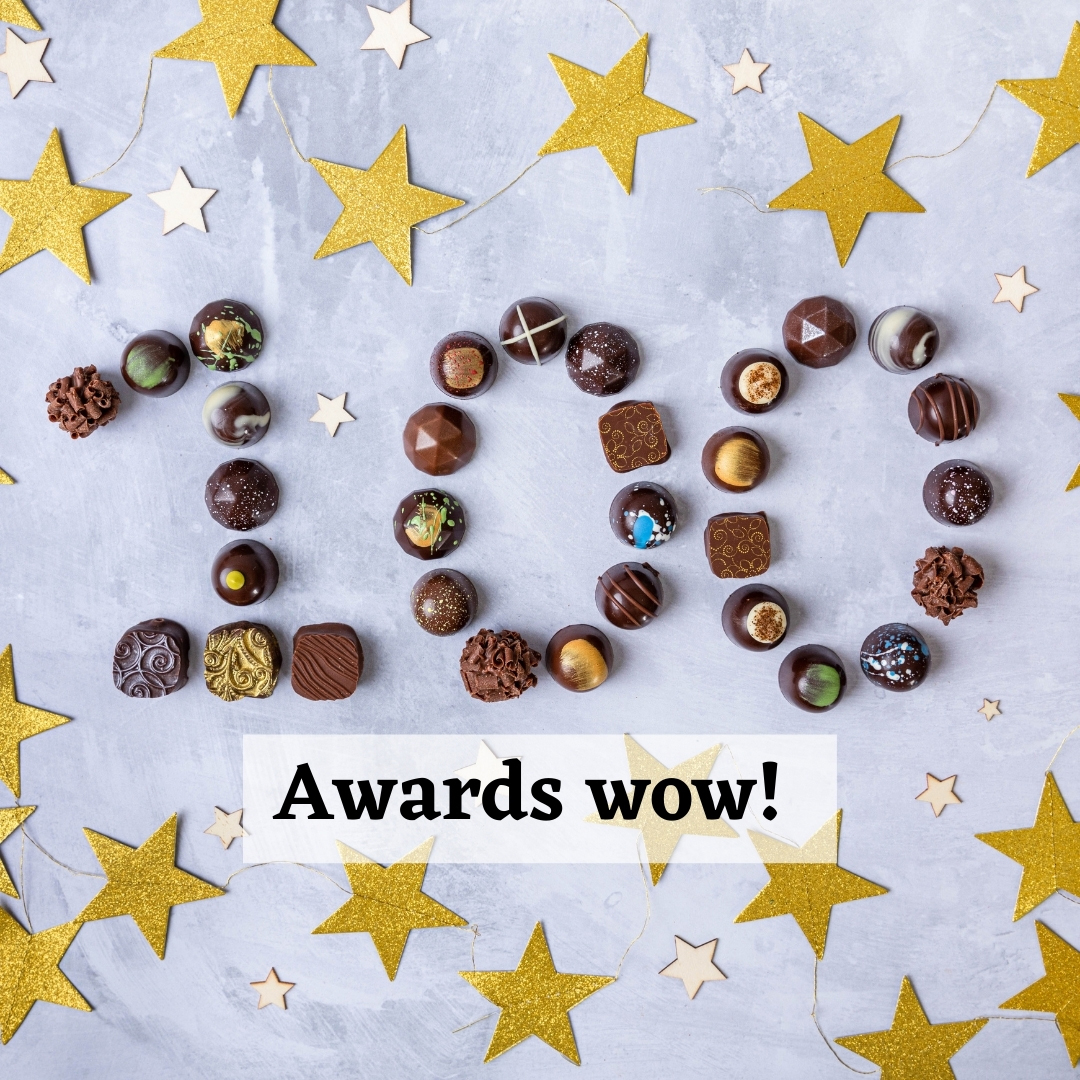 We were thrilled to hear this month that our Spiced Rum chocolate had won not one, but two awards in the 2020 British Chocolatier competition of the International Chocolate Awards. It won a Silver medal and also a Special Award for its use of local ingredients, namely dark rum from the Two Drifters Distillery in Exeter - yes, Devon is distilling rum from scratch! We steep raisins into the rum with a touch of nutmeg, clove and cinnamon and then blend it with our Madagascar 67% dark chocolate. The resulting chocolate is rich, gently spiced, warming and yes, it is also naturally vegan-friendly - happy days indeed! We are still waiting to get the judges feedback to see what they had to say about it.

Since 2002, we have regularly entered the Great Taste Awards, and have now won a total of 58 of those awards over the years, Academy of Chocolate and also International Chocolate Awards, with some of our chocolates winning World as well as British gongs.

We have been thrilled over the years to win the much coveted 3 Star Gold in the Great Taste Awards a few times and one of our chocolates has actually achieved this twice - our Blackcurrant Beauty won 3 Star Gold in 2009 and then again in 2018 - this was hugely satisfying as it was independent industry expert endorsement of our continued focus on creating fine quality chocolates over a long period of time.
A similar thing happened again this year - our Wild Thing chocolate, with its marbled shell revealing a griottine cherry in a dark chocolate ganache inside, is one of our most popular chocolates and as stated above, it was one of our very first winners - it won a Silver Great Taste Award back in 2003 which would be the equivalent of a 2 Star Gold now. We then entered it again in 2012 and it won, yes you've guessed it, a 2 Star Gold. As we hadn't entered it into the Great Tastes since, we decided to do so again this year to check in that it is as good as we all think it is, and guess what, it won a 2 Star Gold again! We were all very happy with that...well a 3 Star would have made us even happier but we like to be consistent over 17 years!

This is what the Great Taste judges this year had this to say about our Wild Thing chocolate:
'These have clearly been well made and look stunning'....'a thin shell of excellent rich dark fruity chocolate releases a juicy boozy griottine. This chocolate is bold, decadent and very proud of all its ingredients which are working so well together to give a great tasting and very indulgent adult chocolate' (editor's note: we think such glowing feedback is worthy of a 3 Star!!)

This year, for the first time, we also entered our popular gluten-free Squidgy Pecan Brownies, which won a 1 Star Gold, and several of our new gelato range, two of which won gongs - our 70% Madagascar Dark chocolate gelato winning a 2 Star Gold which was very exciting, given that gelato is a new avenue for us.

We believe that regularly entering our chocolates helps us get better as we gain valuable feedback from the judges comments and also that it helps give you, our wonderful customers, the confidence to buy from us, as we are officially delicious - you don't just have to take our word for it, independent food and chocolate experts have tasted our creations blind over the last 17 years (eek!) and have given them their seal of approval. We like to enter both customer favourites to check consistency of quality and also new flavours - we dont just enter the same ones year in year out. It is also hugely exciting for the team to win a gong - they love it!