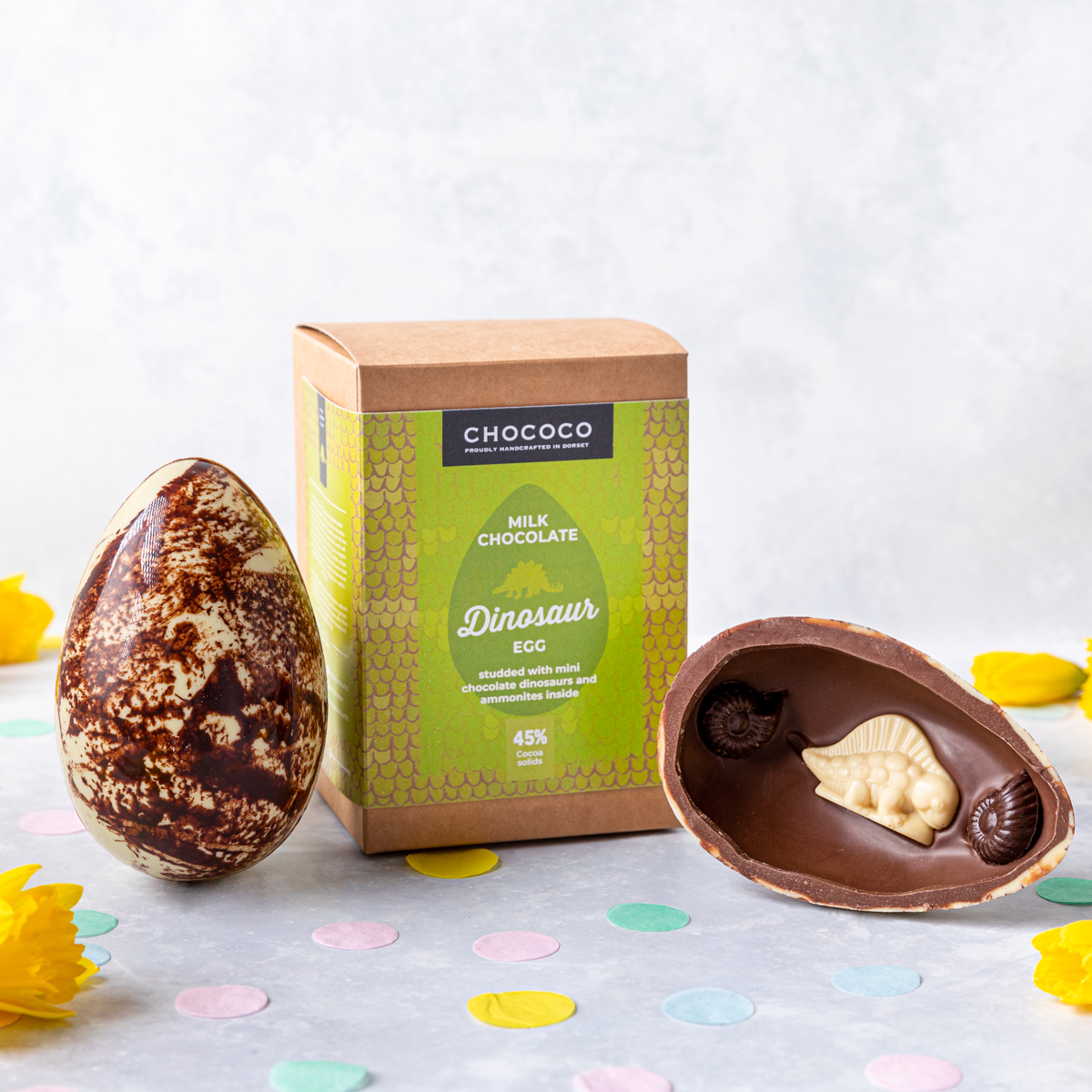 We have been making our Dorset Dinosaur Egg for many years now as our homage to our ancient county with UNESCO world heritage coastline known as the 'Jurassic Coast', running from Old Harry Rocks to the north of Swanage bay all the way to East Devon, which is famous for its stone and fossils! We think our egg, as well as tasting great, is huge fun for paleontologists of all ages.

We mottle the shell in Colombian origin white and Madagascar origin dark chocolate for something that looks vaguely egg-like and to be honest, who knows what a real dino egg would have looked like! The actual egg is made of our bespoke 45% milk chocolate made with fine cocoa beans from the Sur del Lago province of Venezuela, one of the oldest cocoa producing areas in the world. Our milk chocolate has deep rich yet creamy cocoa notes and contains more cocoa than many other milk chocolates, even premium ones. Our milk chocolate contains 18% milk, so the balance is sugar at 37% added sugar, which is a lot lower than many other milk chocolates - as a general rule, the more cocoa, the less sugar as the milk content is usually around 18-22%.
It of course goes without saying that our chocolate is palm oil-free and this egg also contains no colours of any form as we have only used different types of chocolate to decorate it.

The real magic happens though when the egg is broken open as studded inside the shell, as if in rock, are mini white & dark chocolate dinosaurs and ammonites. Each egg is made in several stages as we decorate the shell then fill each half with layers of milk chocolate before studding the shapes into each half. When the chocolate has set, the egg halves are turned out of their moulds and Dan sticks each half together by gently melting each egg on a hot plate before deftly holding them together to seal. He has been sticking our eggs together for many years now and no-one else on the team can come close to his speed and accuracy!

Each egg is then wrapped in food safe tissue before being nestled in its kraft box. All our Easter packaging is in 100% plastic-free, recyclable packaging this year which we are really excited about.

By the way, there is a new giant version of this Dinosaur egg if you want one to share! It is exactly the same design but weighs in at 400g and hides lots more dinosaurs and ammonites inside.

So we were delighted to see that earlier this week, the Independent published their review of 'The Best Easter Eggs for Kids' and awarded our Dinosaur Egg its coveted 'Best Buy' award!

This is what they had to say about our Dinosaur Egg:

'This is easily the most beautifully rendered egg in the round-up, comprising of a glossy marbled shell that arrived in plastic-free packaging. Gently crack it open, and the real magic is revealed – dinosaurs and fossils embedded in the inner walls of the egg. Our tester was genuinely agog about how it was made. The chocolate, which is predominantly milk chocolate, was delicious, and the white chocolate is less sweet than you might be used to and not such a sugar hit. Given how gorgeous it was as an object, it felt a shame to eat it, but it was gone in the blink of an eye!'

They also gave it the thumbs up in their Verdict section at the end of the piece:

'Chococo’s Jurassic offering wins for the ingenuity of the design – how beautiful it is, how interesting and of course how tasty. This makes for a really thoughtful and unusual egg and we can’t think of anyone (adults included) who wouldn’t be delighted with this.'