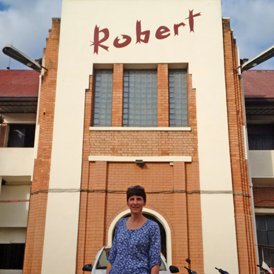 Claire goes in search of cocoa in Madagascar: Blog #1

I have just got back from a fascinating trip to Madagascar organised by Chocolaterie Robert, a Malagasy-owned bean to bar chocolate producer in Madagascar & HB Ingredients, importers of fine chocolate, based in Sussex. We work with Robert's 64% & 70% dark chocolate couvertures sold under the "Chocolat Madagascar" brand for many of our ganaches & all our house hot chocolates and also sell their retail bars in our chocolate houses in Swanage & Winchester & online.
I spent a wonderful week in Madagascar meeting the Chocolaterie Robert team, exploring the country, visiting cocoa plantations, coming face to face with the local wildlife & seeing fresh chocolate being made with freshly dried cocoa beans at their factory in the capital Antananarivo. I have so much to share with you all that rather than try to capture it all in one huge blog, I will write a series of blogs based on different topics.

I hope I can inform, educate and inspire you with my stories, photos & videos (if i can work out how to download them!) of this incredible country and their unique delicious chocolate. We are very proud to work with Chocolat Madagascar chocolate at Chococo and even more so having now spent a week in Madagascar. By the way, I went with a group of other chocolatiers from around the UK and we were all very well looked after!

Before I share with you my experiences visiting the cocoa plantations (Blog #2), I want to flag that this chocolate goes beyond Fairtrade...it is an example of a different model based on the principle of RAISETRADE - what do I mean by that?

Well, Raisetrade is all about encouraging a developing country to support businesses exporting finished products with value added in the country of origin, rather than the traditional trade (even fair trade) model in which raw commodities are exported by the developing country which are then value added to in the West.
By producing finished couverture chocolate in their country of origin, Chocolaterie Robert is adding loads more value to the Malagasy economy in terms of the value added, not just in terms of revenues but also skills development, than if they just exported dried cocoa beans.
I hope these 2 diagrams show the impact RAISETRADE has to the local economy of the developing country: 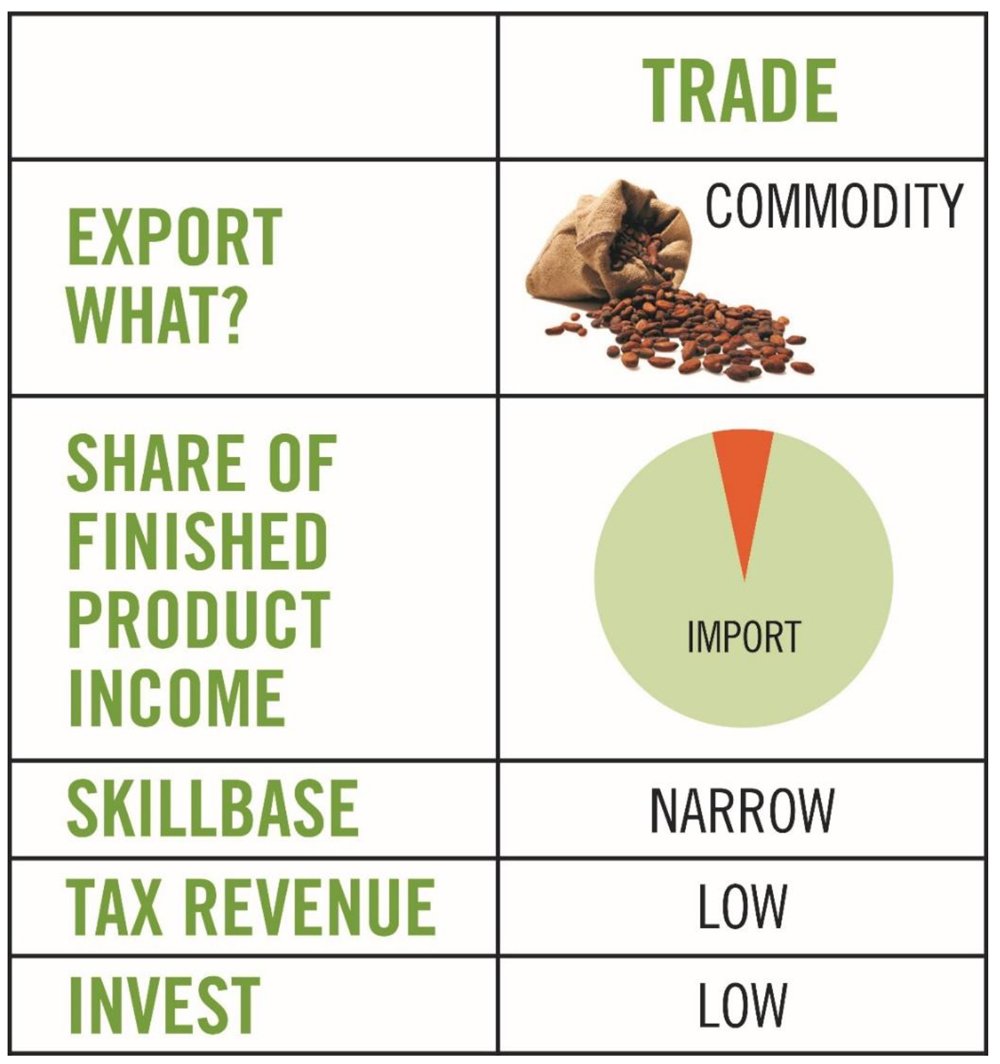 If you are a bit hazy as to where Madagascar is, it is a very large island nation in the Indian Ocean off the coast of Mozambique in East Africa (5695 miles by air from Paris to the capital to be exact), full of natural resources (including semi precious stones, minerals, cocoa, vanilla, spices & hardwoods), and natural wonders in terms of its unique flora & fauna... 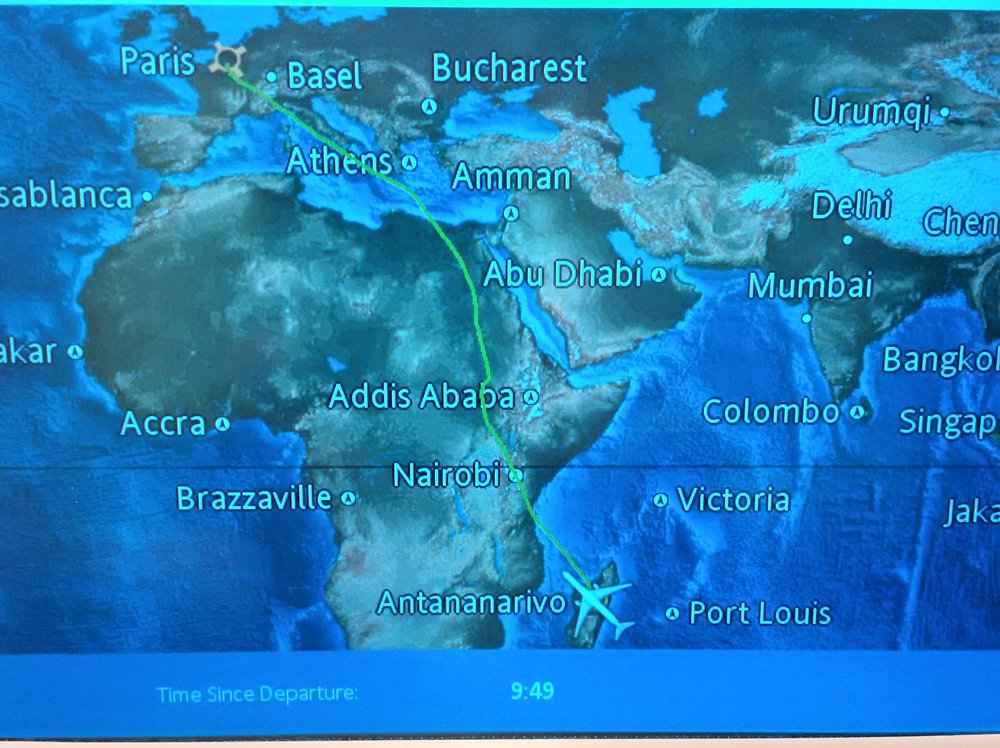 However, it has suffered from political upheavals since gaining independence from France in 1960 from coups & corruption and the majority of Malagasy people are very poor. Whilst the island itself is very large, (it is the 4th largest island in the world), it has a relatively small population of just 23 million in total of which 3 million live in the capital which is rather marvellously called Antananarivo - it is a bit of a mouthful to say it correctly & took me all week to crack it!

Antananarivo is a wonderfully chaotic, noisy, melting pot of a city in the centre of Madagascar. The name means City (tanan) of a Thousand (rivo) and is set amongst a lot of hills. It is a city full of colour & contrasts; of small pockets of wealth alongside extreme poverty, people jumping on & off taxi buses or pushing carts, ancient renault 4 taxis, people drying their clothes on the ground, hole in the wall shops selling piles of rice (they eat a lot of rice in Madagascar), open air butchers, adverts for washing powder and other products painted directly onto walls of buildings, gridlocked streets on market days, no streetlights at night, streets selling nothing but flipflops, pans or beds, regular power cuts (we had supper by candlelight on our first evening) but a friendly smile from the local people. 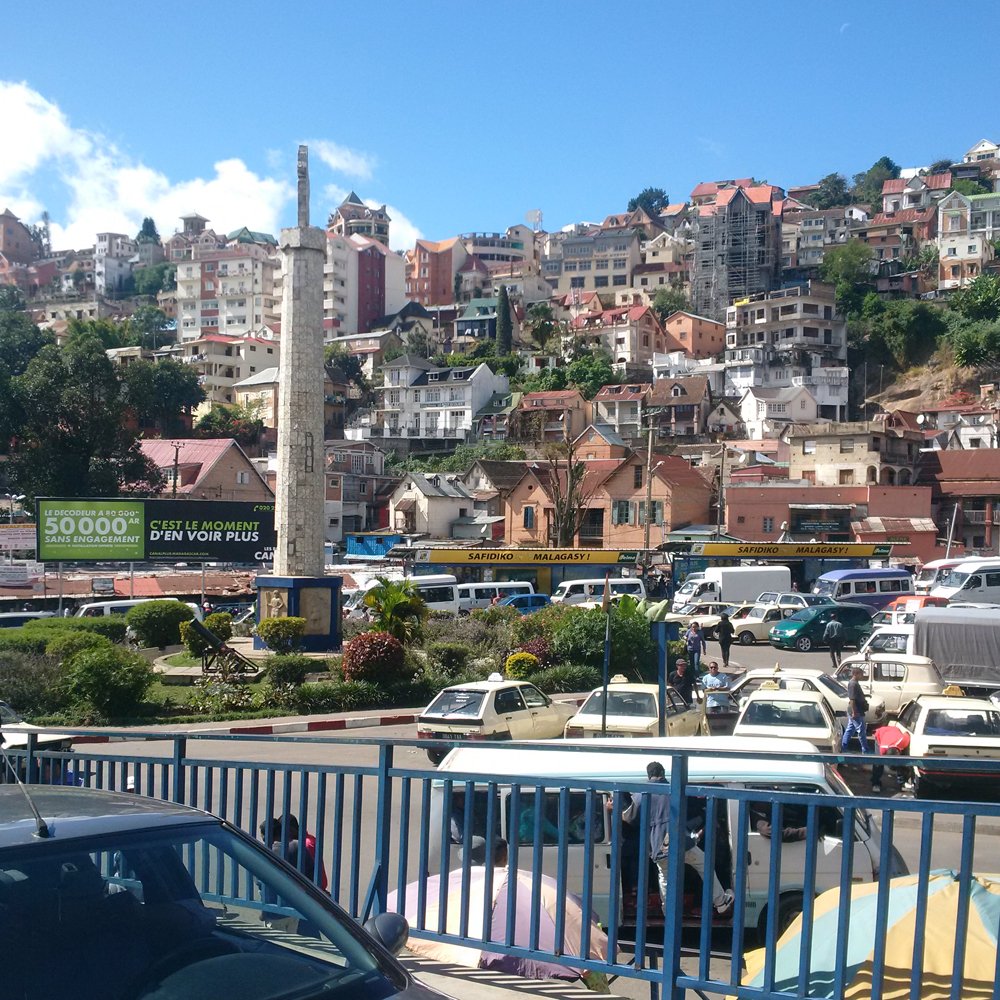 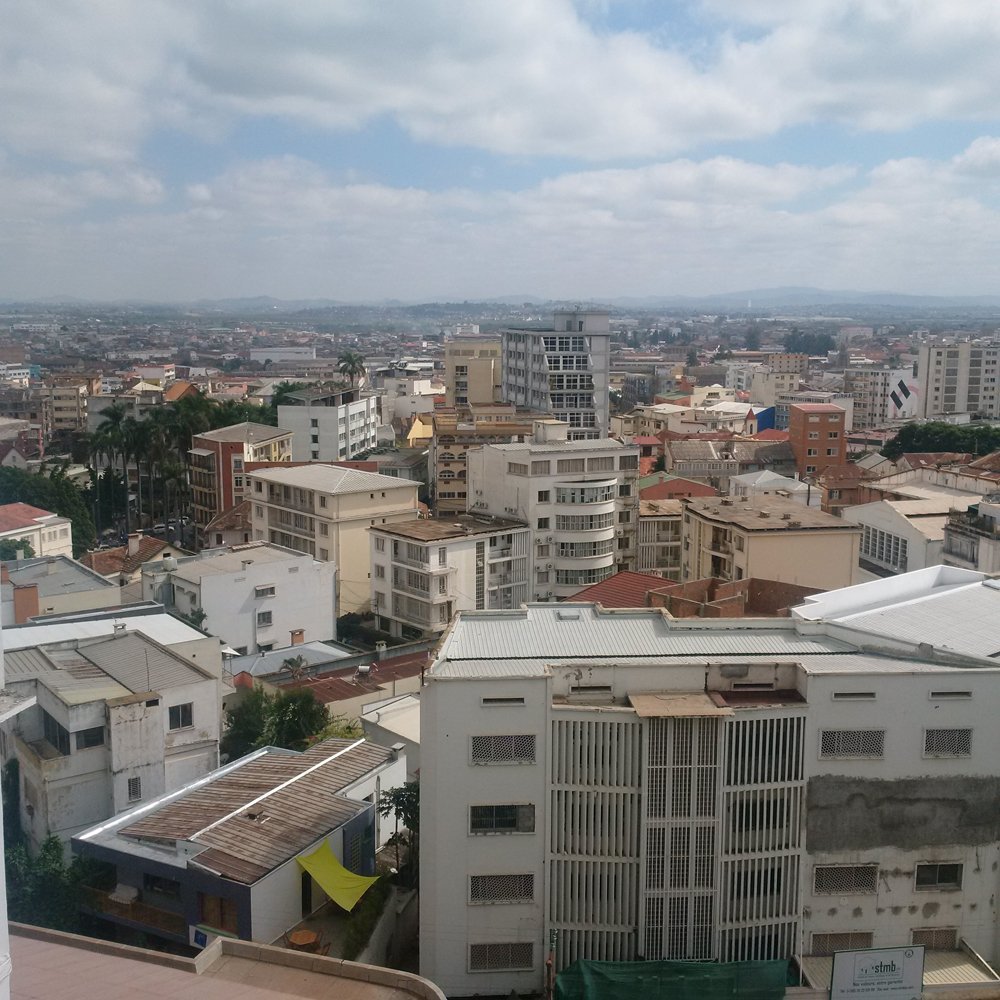 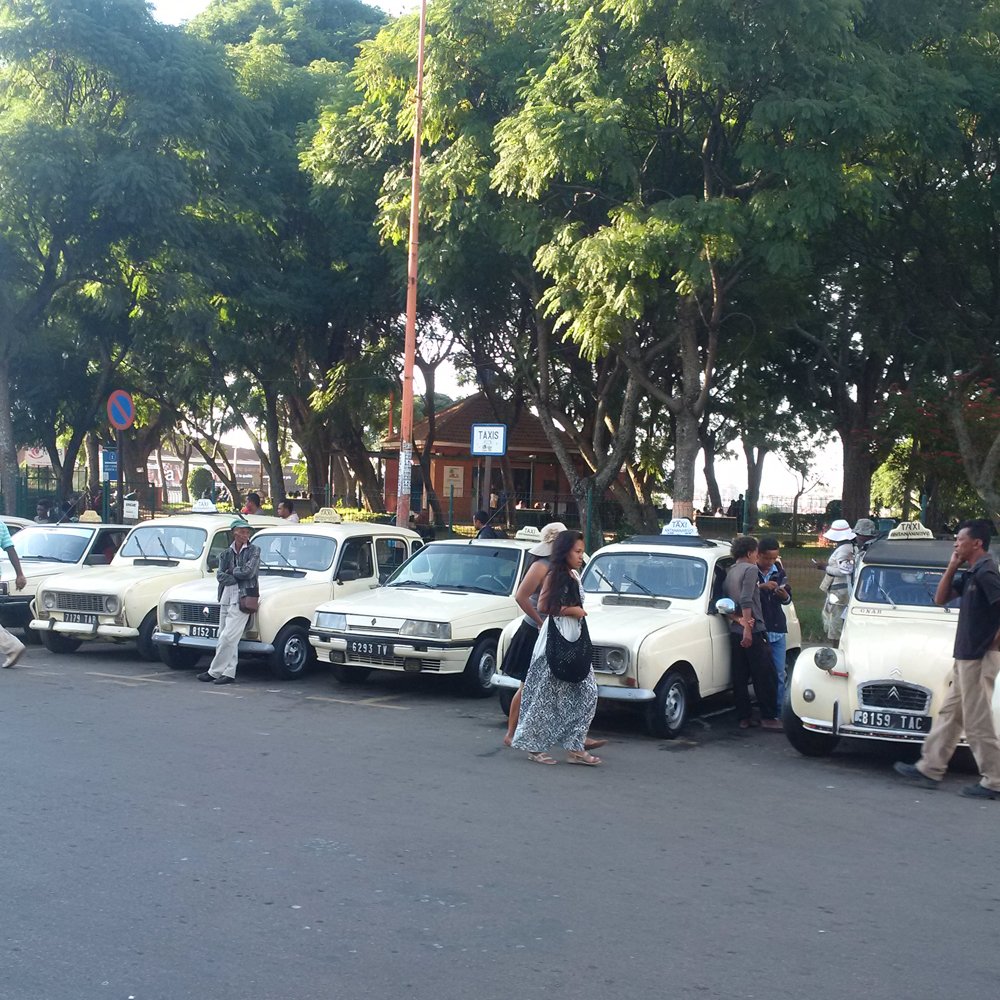 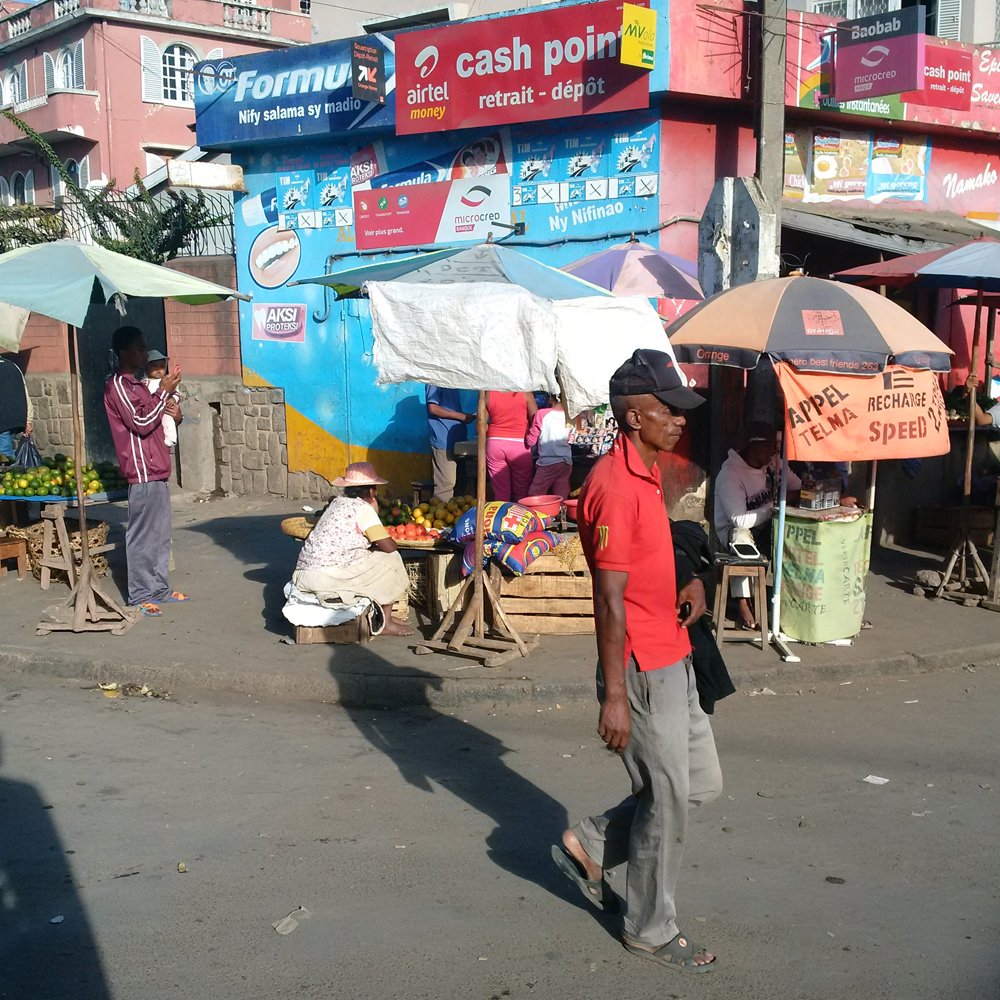 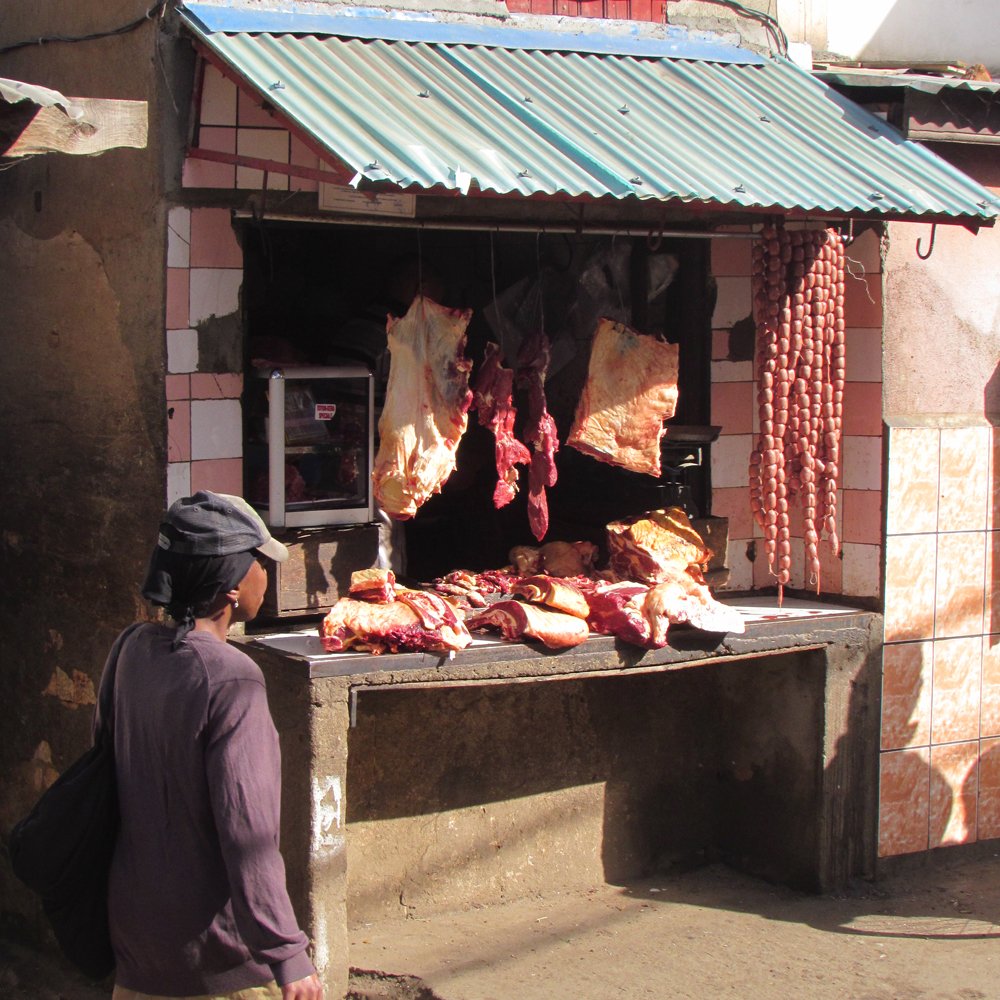 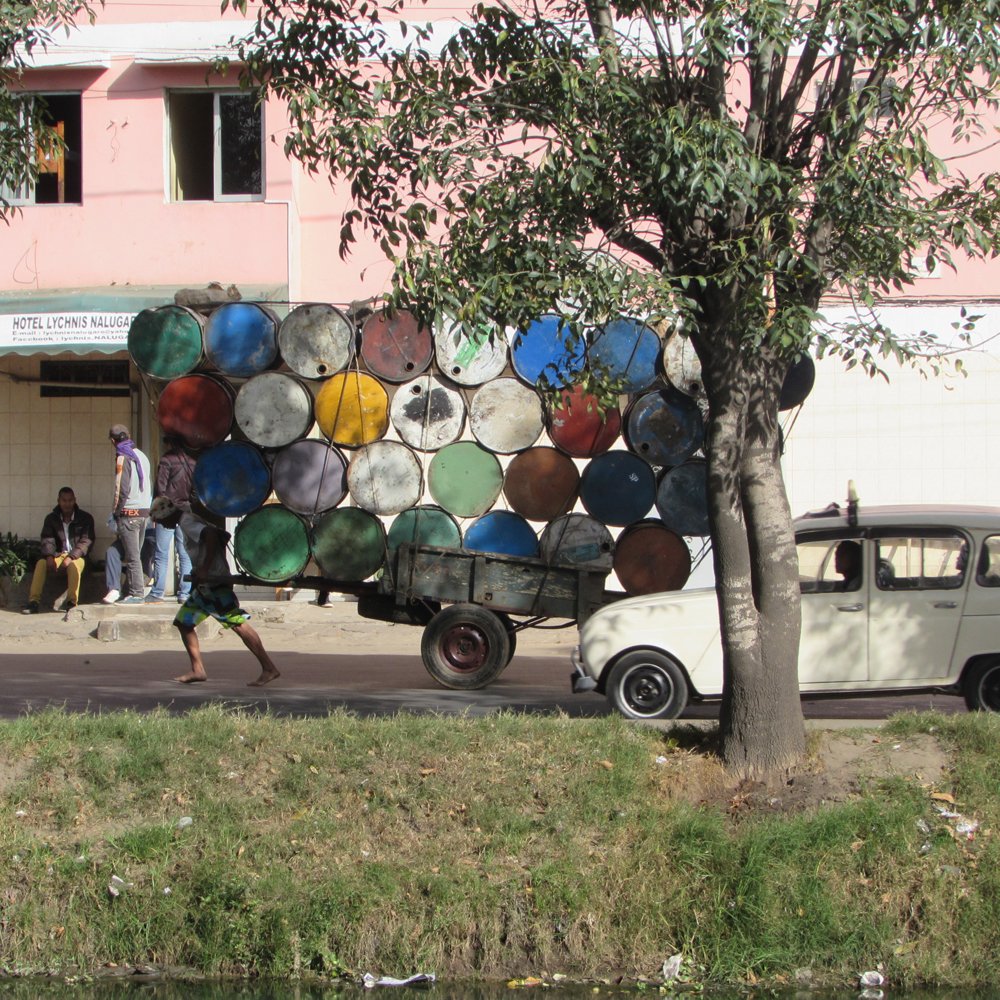 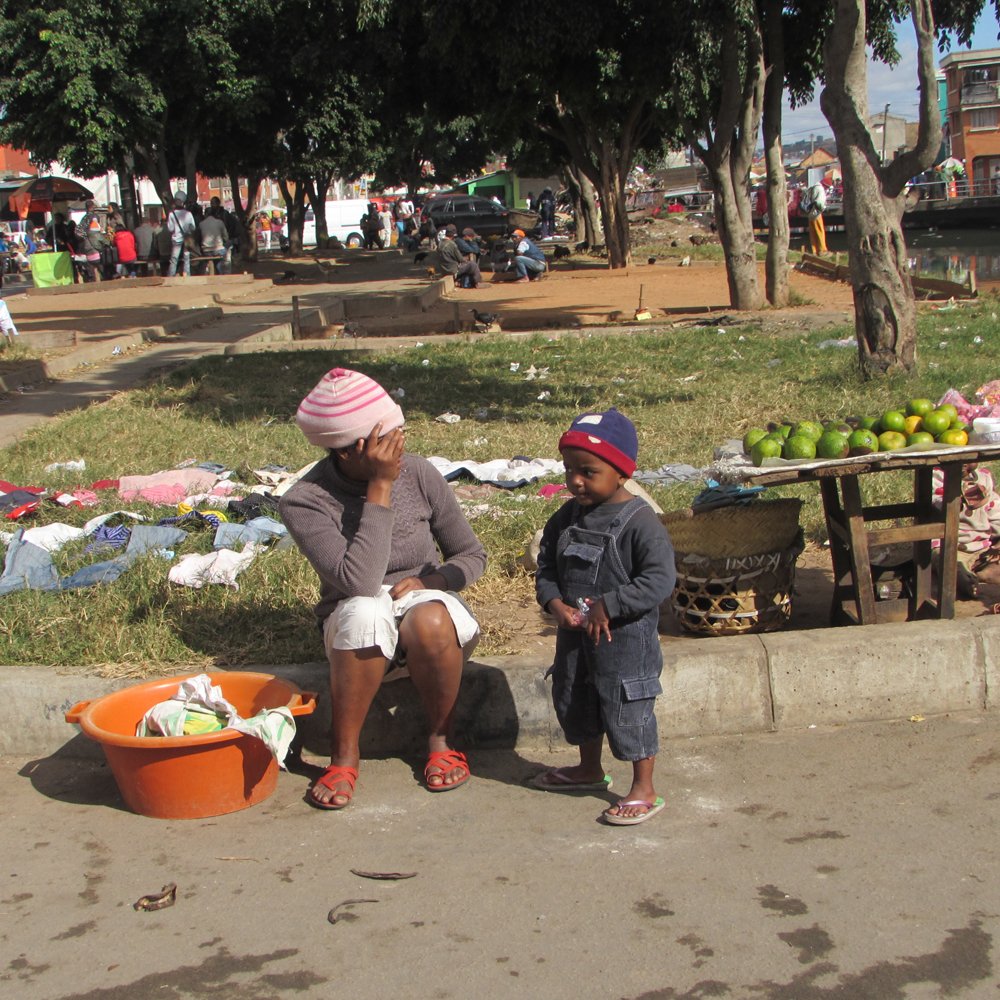 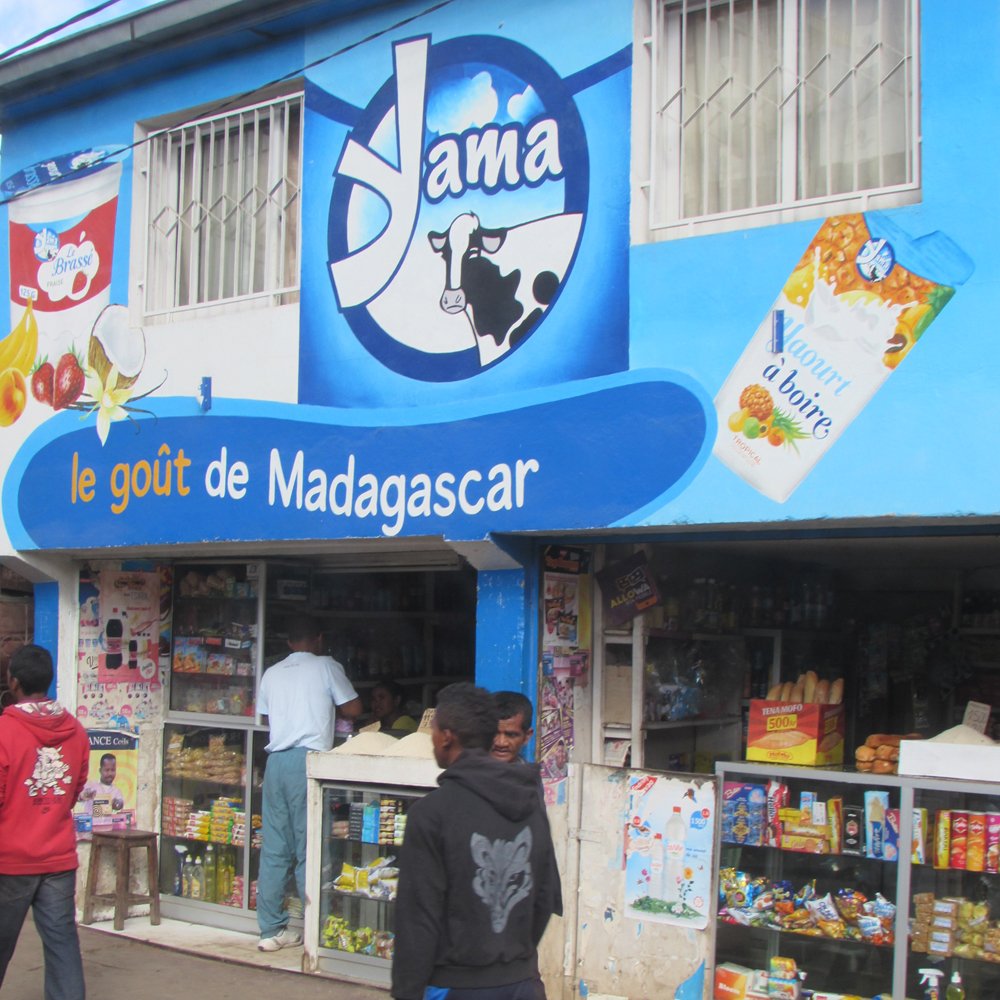 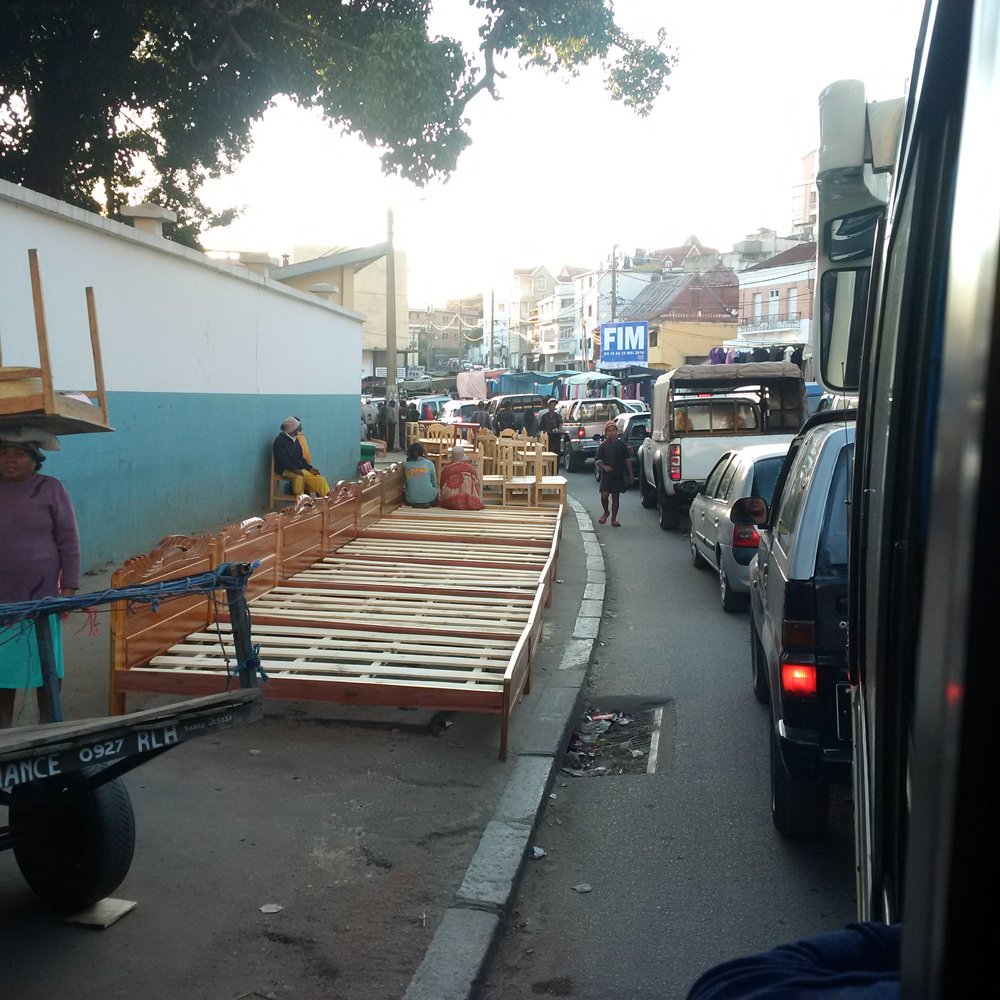 Chocolaterie Robert is a Malagasy-owned company which owns a cocoa plantation in the Sambirano valley in NW Madagascar (more on that below) employing 785 people, and their chocolate factory in Antananarivo, employing a core team of 125, making not only chocolate for export to companies like ours, but also filled chocolates & confectionery for their local market.  It was actually established in 1940 by a couple from the nearbye island of Reunion and was bought by the Ramanandraibe family in the 1970s. They only recently started exporting couverture & retail bars under the Chocolat Madagascar brand & we are very glad that they are! 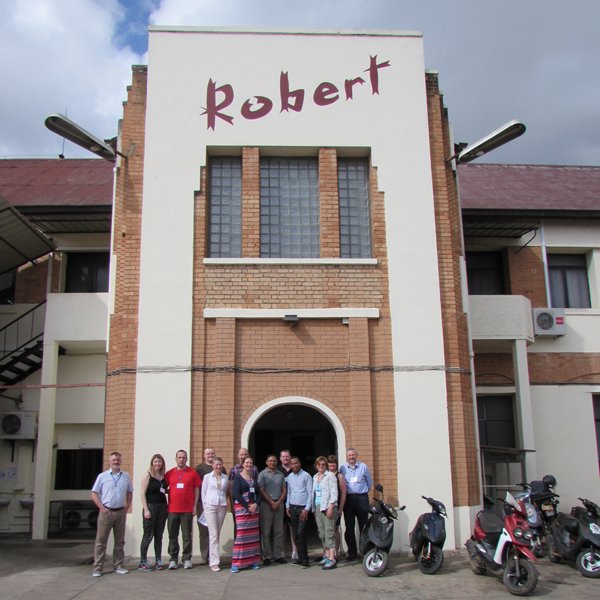 The Robert factory in Antananarivo employs 125 people in skilled jobs that wouldn't exist if all they did was export dried cocoa beans. Not only that, they are supporting the local cane sugar industry (they have to import milk powder as they dont have a large enough indigenous dairy industry) and use locally sourced flavours, packaging and transport....a whole infrastructure around fine chocolate production in the country of origin - that has to be good news for Madagascar.

Meet the team behind Chocolaterie Robert - Marcel Ramanandraibe, the owner & Chief Exec holding our box, Nicolas the export manager (who also very patiently looked after us all week) on the right, Hery the technical director behind Marcel, Neil (the Brit) the export director who is actually based in the UK & helping develop the global exports of the Chocolat Madagascar range & Zu, Stanyella & Lina - all quality control & production managers (great to see women in positions of responsibility). They were tickled pink to get a box of Chococo chocolates! 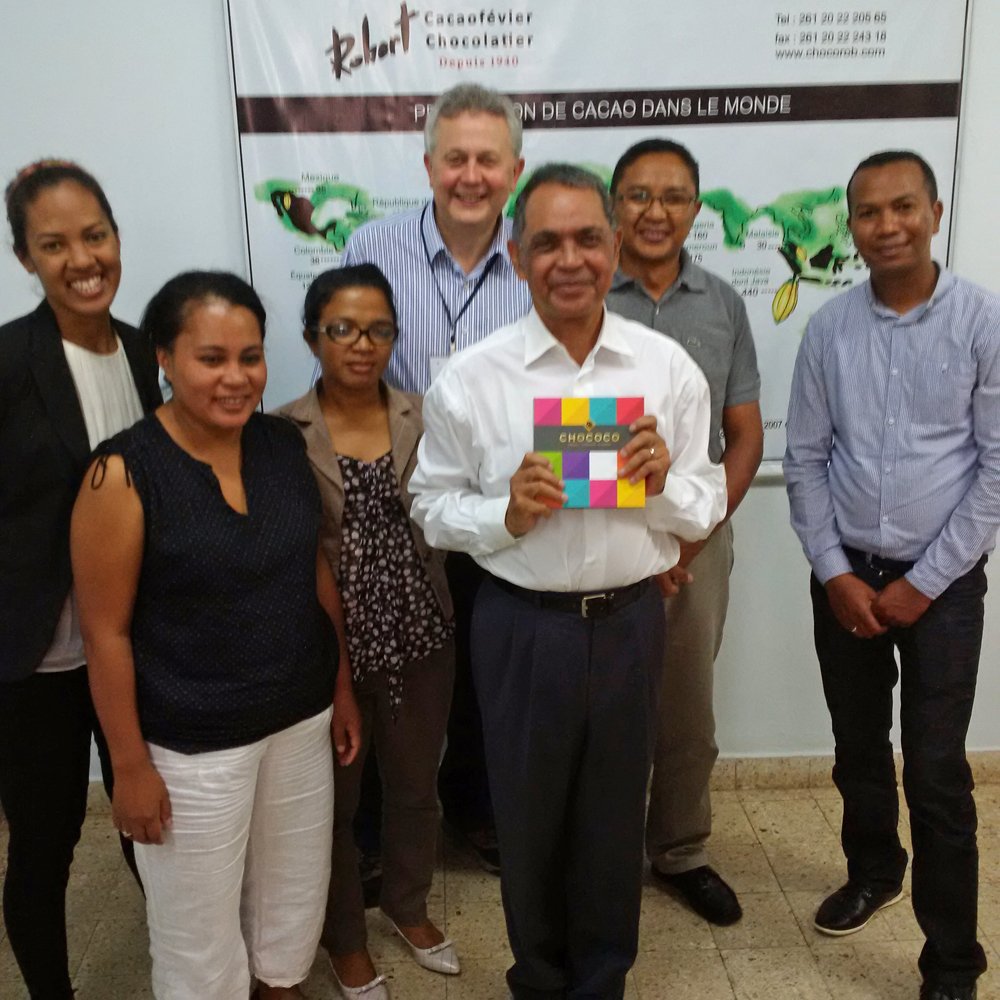 There are a few other chocolate companies in cocoa producing countries around the world following the RAISETRADE model including; the famous Grenada Chocolate Company in the Caribbean, Marou in Vietnam, El Rey in Venezuela & Casa Luka in Colombia - all of which we have worked with either historically or today.

So, having given you a taster of the country & the company, lets talk about COCOA! It took us a few days to actually get to the cocoa plantations - it's not the easiest country to get around, so after a flight to Diego in the very north (more of our adventures there to follow) & then an extraordinarily bumpy bus ride (it took us 8 hours to cover just 210km) on the main road to the Sambirano valley, we made it to Ambanja, the town at the centre of cocoa plantation country......

To read all about my adventures in cocoa country, click here to read my Blog #2! 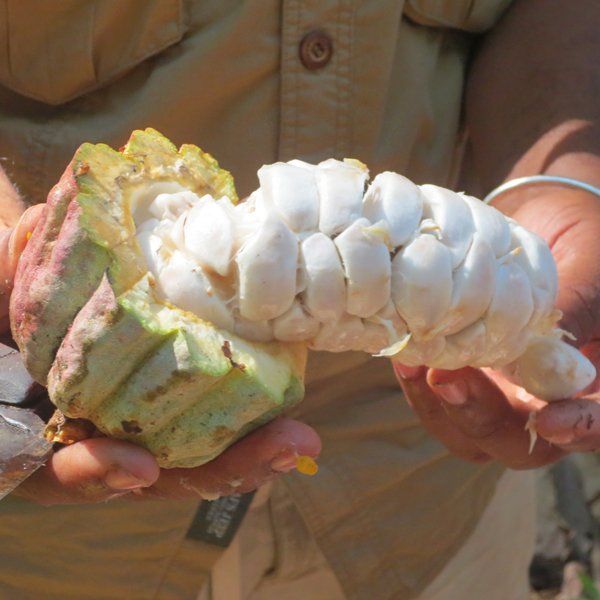