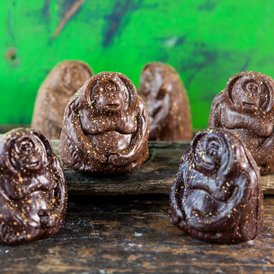 We are proud to announce the arrival of Tuan  and Tuantoo, our new chocolate orangutans, created to help support the work of SOS (Sumatran Orangutan Society), launched today in our 4 chocolate houses & online. We want you to buy Tuan and Tuantoo as, for each one sold, we will give £3.50 to SOS to help them plant cocoa trees as part of their project to restore the rainforest habitat of critically endangered orangutans.

Both are a bespoke and unique new design created in collaboration with Lush Cosmetics, another (much bigger!) Dorset brand. They very kindly adapted their SOS orangutan soap mould for us so that we could make a chocolate version.  Lush have supported SOS for many years and have recently raised money from the sale of their orangutan soaps to buy back land destroyed by illegal palm oil plantations. Now we are doing our bit to help reforest these areas of land with our chocolate orangutans!
They are delighted that we are joining the cause to rebuild areas of this precious rainforest as, not only are orangutans under threat but also rhinos, tigers & elephants. All 4 of these iconic species are now classified as "critically endangered" because of the destruction of their habitat. The reforestation projects will also benefit the local farmers as, underneath the taller trees, cocoa trees are going to be planted as perfect shade grown crops for farmers to be able to broaden their income streams in the future and help them be less reliant on growing oil palms with such destructive consequences.

Simon Constantine, head of Ethical Buying at Lush said this about our involvement with SOS: "Lush strongly believe that we live in a time where businesses, such as Chococo, can have a real and meaningful impact on righting some of the world's environmental wrongs. We see that the future for everyone on the planet lies in forming positive relationships between people and the natural world and what better way than through something as fun and tasty as this!"

Help us rebuild the rainforest

£3.50 from the sale of each chocolate orangutan will go to towards planting cocoa tree seedlings in Sumatra. Every £14 raised (so four chocolate orangutans) will buy and plant one cocoa tree seedling, which will help bring sustainable trees back to deforested areas to restore the orangutans habitat and will fruit in the future. We were thrilled to discover from the SOS team in Sumatra, that orangutans love eating cocoa bean flesh fresh from the pod! Growing cocoa will also bring wider income streams to local farmers. We aim to build relationships with the farmers as their trees mature and in about five years time, we hope to be buying the cocoa beans from them, to make orangutan-approved Chococo chocolate!

Rachel Groves, development director, Sumatran Orangutan Society, says about the importance of projects like this: "We need the support and co-operation of the locals in Sumatra if we are to keep the forest standing. One of the best ways of doing this is working with them to develop alternative income sources that are not linked with deforestation. Increasing the diversity of their crop range is a start and we hope in the long term to encourage growers to form a co-operative to process their cocoa and add value, so they can benefit from the increased income.”

Click here to buy a Tuan or Tuantoo (or even better buy 4 & you will have bought x1 cocoa tree!)

Did you know that some of the biggest British chocolate brands contain palm oil?

It is added to cut costs as they replace a % of the more expensive cocoa butter with cheaper "vegetable fats" including palm oil. It is easy to avoid chocolate containing it though as they have to declare it in their ingredients labels - so just turn the pack around & read what is in it! We never have, & never will, use palm oil as we only work with fine chocolate made with pure cocoa butter.

Why is palm oil so harmful?

Palm oil isn't harmful when farmed sustainably, however unfortunately in Sumatra the rainforests are under immense threat from industrial scale deforestation, with huge areas being flattened to make way for farm land due to the overwhelming international demand for palm oil. Some of it is farmed sustainably but sadly, most of it isn't. In Sumatra there is now 4 times as much land cultivated with oil palms as there is orangutan habitat remaining & there are now only 14,600 orangutans left -  when they are gone they are gone and that would be a very sad day for the planet.