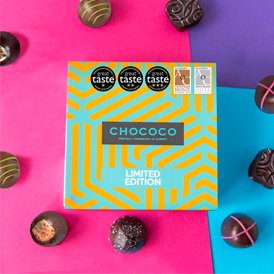 Following our fantastic achievements winning so many national fine food & chocolate awards this year, we have created a limited edition box featuring a selection of our delicious 2018 award-winning chocolates!

We have recently won another 6 Great Taste Awards on top of the 3 Academy of Chocolate Awards we won earlier on in the year. That takes our total to 82 awards since 2003.